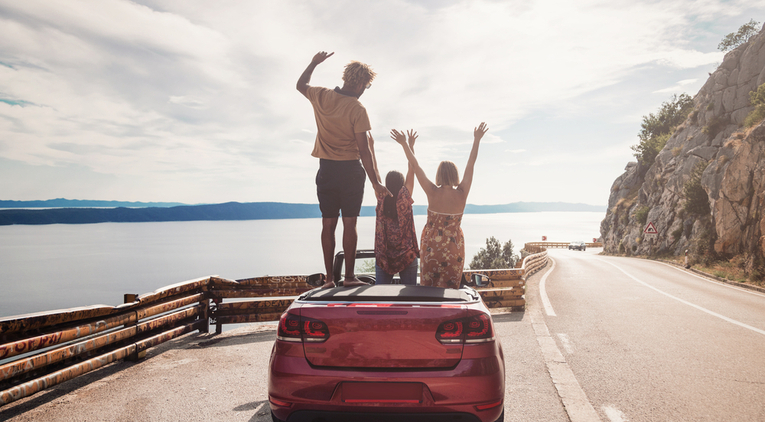 European road trips can be a little scary. You’re driving on the other side of the road, in a car you can’t pronounce the name of, and you’re not entirely sure you’re going the right way. But that’s half the fun. Driving holidays are so different to your standard European jaunt or some generic tour. Check out these seven unmissable destinations for your next European road trip.

Located in Portugal’s South-West, and only a 30-minute drive from Lisbon, Sintra is a magic place to kick-off your road trip. Originally built as a summer play-land for 18th century royals, Sintra’s skyline is dominated by the palaces, mansions, and castles of past monarchs, offset by the spectacular natural park that borders it. To see the best of both, drive up the Sintra Mountains to the Castelo dos Mouros, a rebuilt 9th century fortified observatory overlooking the Sintra-Cascais Natural Park. The castle is set amongst a thick forest, and on a clear day you’ll be treated to amazing panoramic views of the city.

Top Tip: Indicators aren’t considered a necessity by many locals. Always use them when turning, just don’t be surprised if others don’t.

Believe it or not, the often-freezing Estonia actually has some amazing beaches, and Parnu is up there with the best. Depart from Tallin, Estonia’s cultural capital, you can take the coast road and stop in at any of the seaside towns or go inland and check out the ancient woodlands, which cover about half of the country. Head to the beach promenade during the warmer months for a dip or hire a bike and ride the length of the boardwalk. Parnu is divided by the Pärnu River, and paths line the banks, both of which lead to jetties on the bay.

Top Tip: The legal BAC (Blood Alcohol Limit) in Estonia is zero, so don’t drink if you’re not planning on staying the night.

Fussen is the final stop on the famed Romantic Road, a medieval trade route starting at Wurzburg and heading south. Linking some of Germany’s most picturesque towns and villages, The Romantic Road is about 350kms long, and a couple of weeks exploring the area will still not give you enough time to see everything. Fussen itself lies at the foot of the Alps, and is surrounded by some of the region’s most picturesque castles and other historical sites. Stretch out your legs by hiking up to Neuschwanstein Castle and enjoying the view of the mountains from its towers.

Top Tip: The Romantic Road is not the Autobahn, so be prepared to spend some time stuck behind tourist buses.

Situated on the border of France and Belgium, Bouillon is hidden within a lush, green valley on the banks of the Semois River. If it’s warm enough, you can hire a kayak and paddle the 18kms down the river towards Poupehan and be picked up and taken back to your starting point. The walled cities main attraction is the Archéoscope Godefroid de Bouillon, which tells the story of the first crusade using lights and sound. The drive to Bouillon from Brussels will take about two hours through forested hinterland.

Top Tip: It’s best to know the name of your destination in both French and Dutch, both are spoken in different regions of Belgium and the spelling can be very different.

Especially in the warmers months, Split is a great jump-off point for your European road trip. Split used to be primarily known as the gateway to the Dalmatian Islands, but its beautiful beaches, chilled locals and ancient ruins have helped it become a popular destination in its own right. Diocletian's Palace is an awesome fusion of fun and culture, home to the city’s entertainment district and the oldest Roman ruins in the area. It’s a must-see for budding historians and lovers of good-times alike. After exploring the city, cruise down the D8, a 10km stretch alongside the best beaches Croatia has to offer.

Top Tip: Locals use their horns not only as a warning but as a greeting. It’s about as safe as it sounds, but it’s something you’ll have to get used to.

There’s plenty to see and do in Malmo, but the real highlight is the drive to get there. The Oresund Bridge is the longest road and rail bridge in the world, and connects Sweden and Denmark via Peberholm, a man-made island in the middle of the Oresund strait. From Copenhagen to Malmo, there’s a hell of a view from this marvel of modern day engineering, which takes you over 8kms of open water before you disappear into a four lane tunnel.

Top Tip: By law you must keep your headlights switched on even during daylight hours when driving in Sweden.

Driving the Swiss Alps is not for the faint-hearted, but the view from the top of the Zermatt Valley makes all those white-knuckle moments worthwhile. Grachen is a tiny village located some 1620 metres above sea level deep within the heart of the mountains. Far removed from the crowds of nearby Saas-Fee, Grachen has a small but uncrowded skiing area, multiple hiking trails, and a fondue restaurant in the cable-car that services the ski field.

Top Tip: You’re required to have chains on your tyres if blue and white road signs are displayed.

Food Worth Travelling For

10 Countries You Haven't Been To

10 Of The World's Silliest Souveniers